Meaning:
EN: Hill of Warning
DE: Warnhügel
Region:
Highlands
Location:
Blackford, Perthshire
Founded:
1949 by William Delmé Evans
Owner:
Michel Picard Vins & Spiritueux
Status:
Active
Capacity:
2.900.000 LPA
Notes:
Built on the site of the first public brewery in Scotland, dating back to the 12th century
Same water source as Highland Spring
Purchased by a consortium in 2003 for £1.1million, after Whyte & Mackay decided to close it permanently
Located next to a 100,000 visitors a year shopping complex, which helps the distillery immensely
James IV bought beer from the brewery in 1488, this is the most important date for the distillery and appears on all their bottles and around the distillery
Core range is a small series of vintages and a number of otherwise identical wood finishes 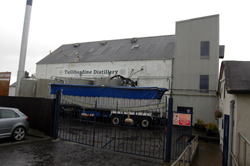