Meaning:
EN: Mill in the Cutting
DE: Talsenke mit der Mühle
Region:
Islay
Location:
Port Ellen, Islay
Founded:
1816 by John Johnston
Owner:
Diageo
Status:
Active
Capacity:
2.400.000 LPA
Notes:
One of the original classic malts
In 2000, the highest selling Islay malt, now only third place
Unusually, the spirit stills are slightly larger than the wash stills and are filled to 95% of capacity for distillation
The ruins of Dunyveg Castle, the 14th century stronghold of the Lords of the Isles, lie on a small island in Lagavulin Bay
A second distillery, called Ardmore, was built on the site in 1817 - the two were merged by Alexander Graham in 1837
Also marketed as Fuaran Ile and The Ileach 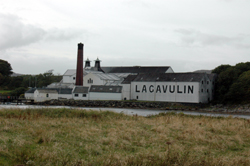