Meaning:
EN: Valley of the River Livet
DE: Tal des Livet
Region:
Speyside
Location:
Ballindaloch, Banffshire
Founded:
1824 by George & Andrew Smith
Owner:
Pernod Ricard
Status:
Active
Capacity:
21.000.000 LPA
Notes:
The first licensed distillery in Scotland - the founders had been distilling illegally since at least 1774
George's pistols (that he was given for self-defence) are on display in the reception centre
George IV personally insisted that Glenlivet keep going - it was his favourite tipple, even as an illegal whisky
After death threats from neighbours, he needed protection by the military
Most important market is the USA 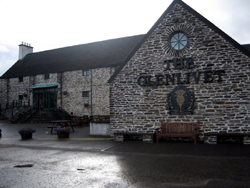