Meaning:
EN: Valley of the Family Grant
DE: Tal des Grants
Region:
Speyside
Location:
Rothes, Banffshire
Founded:
1840 by James & John Grant
Owner:
Campari
Status:
Active
Capacity:
6.100.000 LPA
Notes:
First distillery built in Rothes
Only distillery in Scotland to be named after the founders/owners
Most popular whisky in Italy since a chance meeting in 1961
Previous owners (Chivas Brothers) still own most of the warehouses
£½ million spent on visitor centre in 2008
£3 million spent on new warehouses in Rothes in 2008/2009
Son of the founder travelled to India and S. Africa and created a woodland garden of many new species when he returned
He also returned from Africa with a boy - Biawa Makalanga (Bye-Way), who worked at the distillery and played for the local football team until his death in 1972
20% of production goes into Chivas Regal 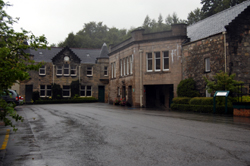