Meaning:
EN: Place of Flowers
DE: Blumiger Platz
Region:
Lowlands
Location:
Wigtown, Wigtonshire
Founded:
1817 by Thomas & John McClelland
Owner:
Bladnoch Distillery
Status:
Active
Capacity:
1.500.000 LPA
Notes:
Most southerly Scottish distillery
On-site cooperage, whisky school, conference centre and live music venue
Scheduled for decommissioning in the early 90s by owners Diageo
Bought cheaply by Irish businessman Armstrong, but part of the deal was that it wouldn't be used for whisky distilling again
In 2000, after much lobbying, Diageo gave permission for production of up to 100,000 litres per year
First release under new owner appeared in 2008 as a 6 year old
The distillery closed in 2009 and re-opened again in 2017
There used to be two pairs of stills, but when the spirit stills were due for replacement, they were scrapped and one wash still was turned into a spirit still 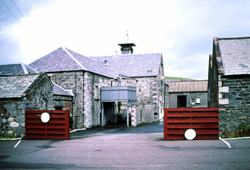